Lake Issyk-Kul lies directly south of Almaty (in a valley behind those mountains I am always showing you).  It is the second largest Alpine (high altitude) lake in the world (behind lake Titicaca in Peru/Bolivia).   Issyk-Kul sits at an altitude of 1,607m (5,272 ft) above sea level.  It is also slightly salty.


Day 1, Bishkek
In order to reach Issyk-Kul, we first had to travel to the capital, Bishkek.  We drove west from Almaty, along the northern edge of the Tien-Shan Mountains before turning south, crossing the boarder from Kazakhstan to Kyrgyzstan, and making the 20 minute drive into Bishkek. 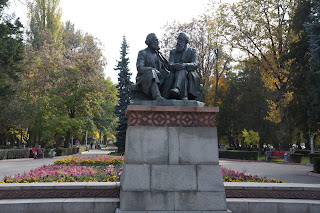 The central park in Bishkek is called "Oak Park."  The park boasts some trees that are over 120 years old (others, of course, are much younger).  Because it is in the center of town, the park contains or boarders other major Bishkek sights. For example, on the northern edge of the park, across from the American University, you will find a statue of Karl Marx and Frederick Engels deep in conversation.  An interesting side note is that this statue replaces a statue of Stalin that was removed after 1991.


On the western border of Oak Park you will find a large sculpture of Kyrgyzstan's epic hero "Manas" (for an introduction to this epic tale, click here) in front of the National History Museum (formerly the Lenin Museum). The tale of Manas is part of a living oral tradition with annual story telling contests and even group recitations of part of the story.  The story of Manas is protected by UNESCO.

The giant statue of Lenin that seems to be a staple of every Kyrgyz town (although Bishkek's is larger than most) is directly behind the museum.

You will find Bishkek's other two attractions to the east of Oak park.  The Opera House (pictured left) was built around the same time and in the same style as the structure in Almaty.  While considerably larger than Almaty's Opera Theater, the Opera Theater in Bishkek is visibly in need of repair and renovation.

Victory square is home to the war memorial in Bishkek.  The memorial is impressive in both size and vision.  It features a yurt with a woman inside waiting for her husband and sons to return from war.  Like many of the famous sights in Almaty and other Central Asian towns, this landmark is a draw for wedding photos.

The other monument that was striking and is worth seeing if you are in town is the monument to those killed in the uprising against a corrupt government in April of 2010.  I remember the news coverage of these events in the west, but for those who don't, our guide told the story this way:  People camped out in Oak park in the days leading up to the uprising.  When the demonstrations began, snipers positioned on the roofs of buildings around the "white house" (the presidential residence at the time), killed more than 80 people in the crowd.  The monument stands where the first protester died, and is striking with two large slabs of marble, one black and one white with a person between the two pushing the black slab over.

The best part of our day in Bishkek was the guest house where we stayed and the medeterranean resteraunt where we had dinner.  We stayed at a small, cozy guest house called "Hotel Asia Mountains" where the rooms were cute, clean and comfortable.  The walls were covered with art and artifacts from the region and the wood furnishings added charm.  As an added bonus there is a stunning garden and places to sit outside.

We had dinner at an amazing restaurant just across Ibraimov street from Victory Square called L'Azzurro Restaurant.  They serve a variety of food including (perhaps most impressively), Lebanese and Mediterranean food.  Their service was phenomenal and friendly and our little band of travelers had a wonderful evening thanks to this restaurant's hospitality.
Tomorrow's installment: Day 2 - ancient wonders and smoked fish.
Posted by Khaki Sandy Girl at 5:45 PM